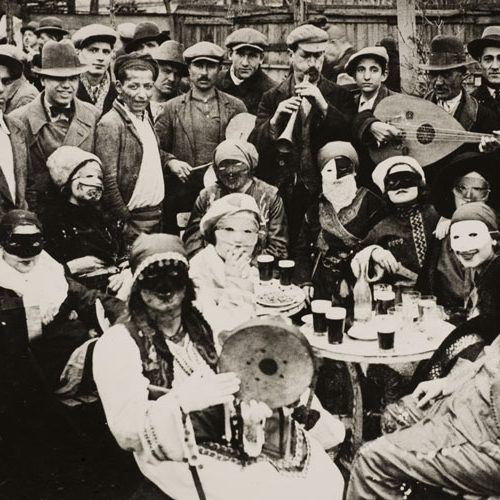 In times past, for the local Greek-Orthodox communities in Istanbul, the three weeks preceding Great Lent was a time of carnival as they donned masks and costumes and celebrated with their neighbors until the great festivity of Clean Monday (Kathara Deutera). This carnival, called “Apukurya” by Turks, would start with a parade that proceeded from Galata and Pera to the Church of Saint Demetrius, and conclude with a street party in Tatavla. Following the carnival, which was also called “Baklahorani”, literally meaning “to eat beans” due to the Orthodox tradition of abstention from the consumption of meat, the local Greek community would seclude themselves in their homes for fasting and praying until Easter.

The Tatavla Carnival welcomed all residents of the city, and the tradition of festivities persisted until 1941. Today, this important heritage of Istanbul’s culture of festivity and music is revived once again with a concert as part of the newly established “Istanbul and Music” Studies Program (IMSP) section of the Istanbul Research Institute. The amanés and dances of Solon Lekkas from Lesbos, the violin and cura of Kyriakos Gkouventas from Athens, the lute of Vasileios Kasouras from Thessaloniki, the santur of Evangelos Paschalidis, and the vocals of Stelyo Berber from Istanbul are coming together to evoke memories of Tatavla, the carnival that marked an early beginning to spring.