Ali Emiri Efendi and His World

If the cultural inheritance of past, particularly the fragile and perishable pieces of the inheritance - such as books, documents, manuscripts or photographs - miraculously manage to survive until the present day, it is mostly trough the efforts of a number of nameless heroes, who dedicate their entire lives to the collection, preservation and transmission of these objects to future generations. Thanks to these men, who recognize and appreciate their value, many priceless works of the past have withstood wars, destructions or natural disasters, transcending centuries to assume their places in today's contemporary museums and library collections.

Ali Emîrî Efendi and his world exhibition we are hosting in two sections, in the halss of Pera Museum and İstanbul Research Institute today, sheds light to the unconventional adventure of such a man. Through the imperial edicts, books and calligraphic works he excavated from the debris of a deteriorating empire, and subsequently preserved and donated to the Millet Library he established, as well as a selection of his personel belongings and documents, we encounter the persona of Ali Emîrî Efendi as a "culture man" and journey into a world he was passionately connected to.

Ali Emîrî Efendi was born in Diyarbakır, one of the most significant areas among the Ottoman provinces. He was not exposed to a conventional education. Much like all Tanzimat period employees, his life was spent traversing the empire's geography from one end to the other. He collected rare books in the course of his travels. The ones he could not acquire, he copied by hand to save them being forever lost. For Ali Emîrî Efendi, books were not a collection item but rather a tool for discovery through reading. He was not interested in the movements of modernization during the period in which he lived. His greatest passion was to familiarize new generations with the Ottoman-Turkish heritage. To accomplish this, he established the Millet Library and donated his books to his "nation."

Ali Emîrî Efendi was a poet, a historian, a biographer and a publisher. He was particularly recognized as the book connoisseur who rediscovered Dîvânu Lugâti't-Türk. He was never married, never had his photograph taken and never set foot in Beyoğlu. He spent his life reading and writing, in the company of his books and cats.

Hosted by Pera Museum (3rd floor) and İstanbul Research Institute, Ali Emîrî Efendi and his World exhibition is compartmentalized into three major sections. The first section is comprised of 49 fermans and berats, extending over 500 years, from Sultan Süleyman, the Magnificent, to Sultan Reşad. These 49 spectacular works of tuğra (imperial monogram), hat (calligraphy and tezhip (decoration) are being brought to light for the first time. The second section includes 31 kıt'as (rectangular calligraphic works) and levhas (large-scale panels) by the greatest masters of calligraphic art. Penned by Şeyh Hamdullah, Hâfız Osman, Yedikuleli Seyyid Abdullah, Şeyhülislâm Veliyüddin Efendi, İsmail Zühdi, Mahmud Celaleddin and Kadıasker Mustafa İzzet Efendi, these calligraphies reveal the quintessence of Ottoman aesthetics. The third and final section is a selection from the rare and precious books Ali Emîrî Efendi collected in a lifetime. This wide spectrum consists of 69 books, ranging from the Ottoman sultans' collective poetry to medicine, from geography to history and Sufism. Discovered by Ali Emîrî Efendi in 1914, the sole copy of the legendary Dîvânu Lugâti't-Türk, which was written by Mahmud of Kashgar in the 11th century, is revealed to the public for the first time in this exhibition. 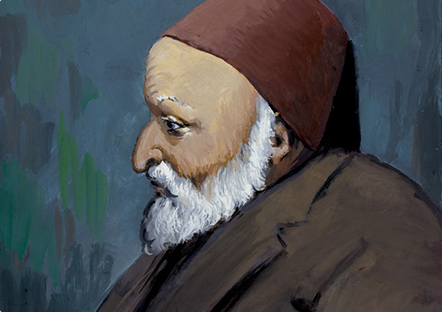