18th-Century İstanbul in the Paintings of Clara and Luigi Mayer

Accelerated in the 18th century with the idea of Enlightenment, travels to the East was attractive not only for statesmen, politicians and travelers, but for the artists as well.

With its aesthetic conventions evolving from classic to modern, İstanbul became a center of attraction for European artists of the period. Taking the West by a storm, the heart of "Turquerie" was now beating in the Ottoman Porte.

Opened at the İstanbul Research Institute galleries, the exhibition is comprised of the unparalleled picturesque views the city had to offer in late 18th century by Luigi Mayer, who came to the city along with Sir Robert Ainslie, ambassador to the Ottoman Porte between 1776 - 1792, and by his wife Clara Barthold Mayer. Nine watercolors by Clara Barthold Mayer and one by Luigi Mayer that are on display belongs to the Suna and İnan Kıraç Foundation Orientalist Paintings Collection.

Luigi Mayer was one of the most important 18th century European artists to have been lured by the magic of the Orient into painting this geography. Mayer studied art in Italy. In 1771, he gained recognition by winning the drawing award of Académie de St-Luc. Inspired by the ideas of the Enlightenment flourishing in the Late Baroque era, he painted ancient civilizations. Between 1776 and 1792, he travelled extensively across Anatolia as part of the archaeological expeditions of Sir Robert Ainslie, who had taken up the position of ambassador to the Ottoman Porte. Upon his return to İstanbul, Mayer married Clara Barthold. Together, the couple portrayed the unparalleled picturesque views the city had to offer in late 18th century. The naïve aestheticism and realistic style of Mayer's art reflects Sultan Selim III's modernizing İstanbul in a well-balanced manner.

CLARA BARTHOLD MAYER There is hardly any information available about the life of this artist. Various sources indicate that she is of Swiss origin and that her father served as a dragoman in the British Embassy in İstanbul. Clara Barthold met Luigi Mayer in İstanbul and after they were married, she moved to England with her husband in 1794. Focusing on figural landscapes, the artist's works were published in London the same year by J. Harris. Barthold also published her husband's paintings and, following Luigi Mayer's death in 1803, continued to work out of their house in London's Portman Square. Clara Mayer's watercolor entitled, Entrance to the Port of Constantinople, as well as her Bosphorus, Sarayburnu and Yedikule, compositions engraved by John William Edy are currently preserved in the Victoria and Albert Museum Collection.

A PANORAMIC VIEWPOINT OF İSTANBUL IN THE 18TH CENTURY

"Imagine a vast river flowing from north to south, surrounded by houses in all the different colors; lovely mansions on the slopes, magnificent pavilions amidst blossoming gardens. (...) Imagine a river upon which the residents of an immense city are ever present and its shores are replete with marvelous meadows, enchanting valleys, and splendid kiosks in which Turkish sultans, European ambassadors, rich Greek, Armenian, Jewish, and European merchants rest, recover, and enjoy the pleasures of this life."


"The caïques of the sultans are noticed immediately from a distance with their size and elegance, gilt and ornamentation, the number of their oarsmen and grandeur. They are equipped with fourteen pairs of oars. Dressed in white, 28 Bostancis row haughtily as the Bostanci-bashi steers the Imperial caïque. Each one of the sultan's caïque excursions and return to the palace is greeted by a salvo of artillery fire. The Imperial caïque is distinguished by the beautiful, deep red, gold-trimmed canopy at the stern."


"The Bosphorus extends from one shore to the next in the stretch of half a mile. The distance from the Port of İstanbul to the Black Sea must be a little more than five leagues. Forming little coves, the densely wooded shores (...) are decked with settlements one after the other. Immediately near them are towns crowned with waterfront mansions with wharves at the front for the promenading public and for the protection of boats against the strong currents of the Black Sea." 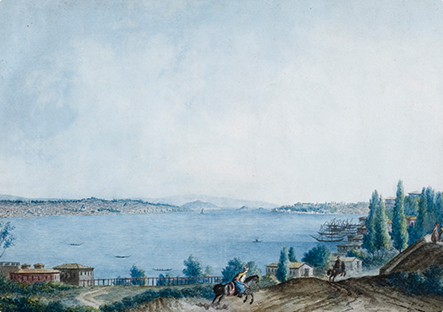 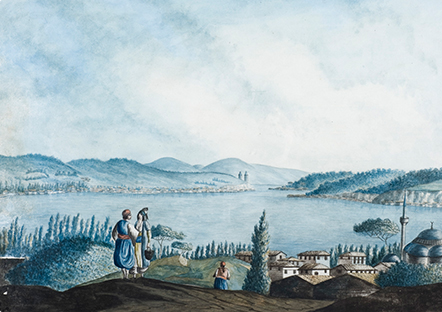