İstanbul in the Panoramas of Melling and Dunn

İstanbul Research Institute opens a visual window to the city of emperors and sultans with the exhibition entitled, Long Stories: İstanbul in the Panoramas of Melling and Dunn. A micro-level study of history focusing on the historical topography of the city, the exhibition is curated by Ekrem Işın, with M. Baha Tanman acting as the project consultant.

Panoramas constitute the visual narratives of a city. Emperors and sultans cast their shadows in the images stretching before our eyes; the symbols of power piercing the sky are surrounded by the cultural texture of daily life, as well as the city's architectural composition and nature. The raison d'être of a panorama is to bear witness to the urban image that appears as a protagonist on the stage of history, set against the civilizational décor that the eye perceives at first sight.

Panoramic images of the city came in view during the Renaissance period. Cities, which emerge as the new lebensraum in the Middle Ages, provoke the transformation of the old cartography techniques as the boundaries of cultural geography expand. As of the 15th century, panoramic maps reflect the ways in which the Renaissance men perceive the city. In this perception, the city and the political authority that builds it are closely intertwined. The concepts of "The City of the Pope", "The City of the Caliph", and "The City of the Sultan" implement diverse civilizational designs in the minds of people through the new visual possibilities that panoramic engravings provide.

The İstanbul panoramas of Antoine-Ignace Melling and Montagu B. Dunn, which constitute the exhibition, are spectacular documents that shed light to the city's history of modernization. Melling demonstrates his dedication to the ideals of the Enlightenment through his realistic approach to the historic topography of the late-18th century İstanbul. Dunn, on the other hand, reflects the new visage of a post-Tanzimat İstanbul he arrives in during the Crimean War (1853-1856). Both panoramas remain as scientific testimonies to the changing urban image of an İstanbul in the process of modernization.

Antoine-Ignace Melling (1763-1831) was a leading figure among the creative individuals that the Age of Enlightenment presented to İstanbul. Born into a family of artists, he undertook an expedition to the East in 1782. He arrived in İstanbul in 1784 as part of the Russian Ambassador Bulgakov's retinue. His close circle of acquaintances included renowned figures of the period such as Choiseul-Gouffier and Mouradgea D'Ohsson. He was introduced to Sultan Selim III's (1789-1807) sister Hatice Sultan and subsequently designed the interior as well as the garden of her Waterfront Palace in Defterdarburnu. His accomplishments were noticed by Selim III, who in turn, appointed Melling as the imperial architect. Beşiktaş Palace, Top Kapısı Waterfront Palace project, Çırağan Palace and Şerifler Yalı all feature his signature style.

Melling's panorama occupies perhaps the most important place among the last testimonials to the images of İstanbul depicted before the emergence of photography. The work in this exhibition is the sketch upon which his famed İstanbul engraving is based. Combining his training in architecture and engineering with his artistic talent, Melling adroitly penetrates the soul of the city and becomes one of the leading architects of modernism that the period of Selim III introduced to daily life. The panorama stands out with its realistic approach to depiction. It is possible to observe in complete detail the new structural developments along the seaboard of Topkapı Palace. Şevkiye Pavillion, the New Garden and Top Kapısı Waterfront Palace stand as part of this development.

On the other hand, when Montagu B. Dunn arrives in İstanbul as a young naval lieutenant, the city he encounters for the first time is transformed into a military base as a consequence of the Crimean War (1853-1856). In a sense, İstanbul is being reborn in the project designs of European engineers and architects. It is thus possible to observe in Dunn's panorama, the striking images of modernization in a wide spectrum that extends from architectural structures such as the Fire Tower of the Offices of the War Ministry, the Russian Embassy, Nusretiye Mosque, Mecidiye Barracks and Dolmabahçe Palace, which assume their places in the city's skyline, to the ever-evolving cosmopolitan texture of daily life.

Long Stories: İstanbul in the Panoramas of Melling and Dunn is not only a visual feast, but also a historical survey, which compels viewers to reconsider the identity of a city that left its mark on the art of panoramic engraving. 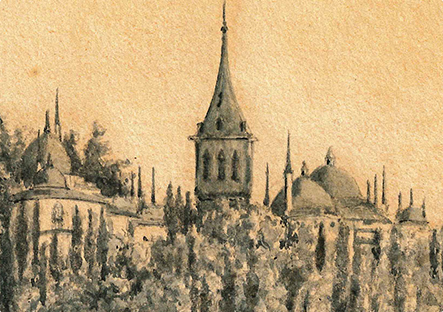 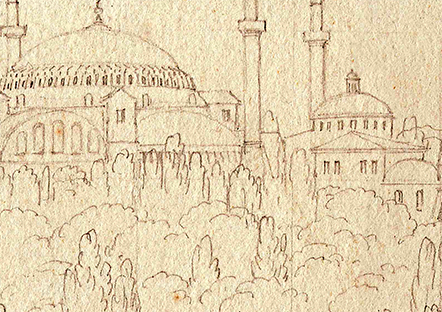 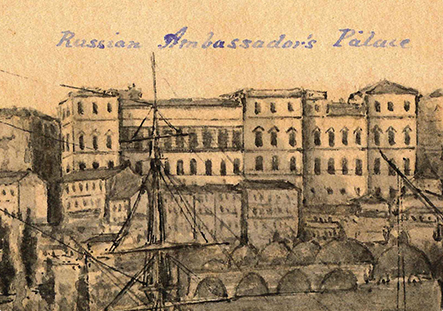 Long Stories
İstanbul in the Panoramas of Melling and Dunn