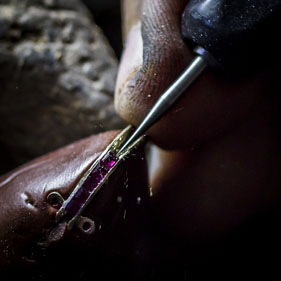 Artisanship-Design-Innovation
Relations in the Pursuit of İstanbul Jewellers:
“Living Human Treasures” of the Grand Bazaar

Since the 2000s, Turkey has been second only to Italy among countries working gold into jewelry for export. The most important asset behind Turkey’s international success is the capability of working precious metals, which is the extension of the multi-layered cultural heritage located in Turkey, for every civilization of the region has left a legacy in jewellery. The production behind the international success of the last two decades comes almost entirely from the Grand Bazaar and the commercial buildings (“han”) around Nuruosmaniye. These buildings in and around Kapalıçarşı have become and continue to be the centre of jewellery production.

Since the Ottoman period, Kapalıçarşı has been the unchanging centre of mastery outside the palace, of individual handicraft of the pre-industrial era, and of the most delicate production. Masters from various parts of the empire opened shop in the Grand Bazaar and the buildings around it, creating the centre of jewellery in İstanbul. Greeks, Armenians, Persians, Assyrians, the Daghistani, Crimeans, and Cossacks created products that pleased the Ottoman taste. Producing for the Grand Bazaar and mass production are said to constitute two poles. The Bazaar became famous as the locus of special and different products (in the Ehl-i Hıref style). It is known that some of the masters here emigrated to France, Britain, and the States, and that   some of the famous jewellers in these countries are Greek and Armenian masters from İstanbul. Throughout the 550-year long history of traditional production, the changes in social demographics has directly affected social, economic, and political contexts, and there have been discontinuities in traditional and original production techniques. Even though it is known that the jewellery production in the Grand Bazaar becomes valuable through workmanship and original production techniques, these are gradually being lost with the changing demographics structure, as attested to by old masters and shop owners.

Free of admissions, drop in. The talk will be in Turkish.