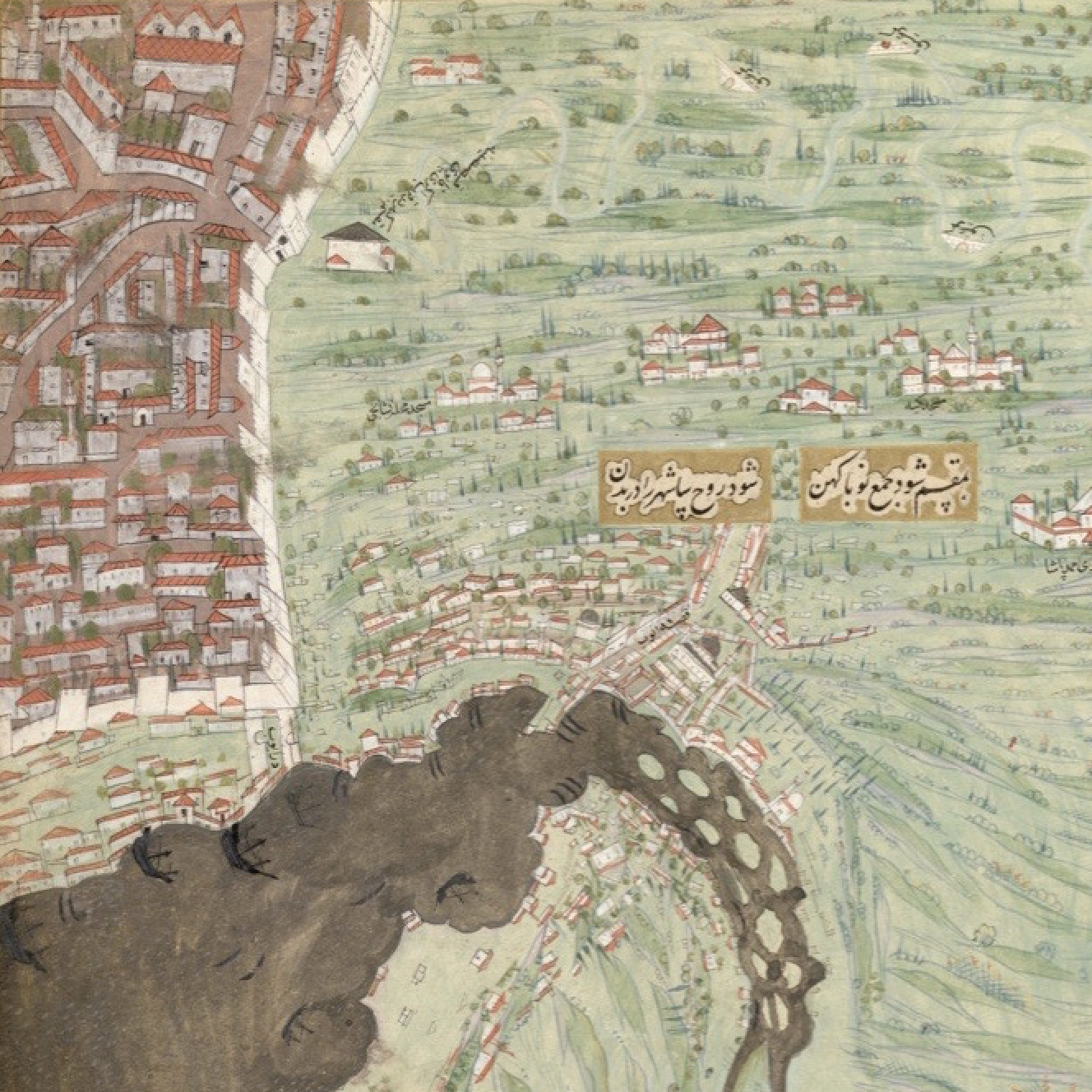 Early modern Ottoman maps of Istanbul (sketches preserved in archival collections, planar maps appended to court histories or geographical works and waterway maps preserved in rolls) shed light on the built and natural environment of the city, and on the interrelationships between its man-made aspects and the natural habitats.  Waterway maps, which will be discussed in detail, typically depict aspects of the water supply and distribution of Istanbul through a varied set of conventions; they contain information on the sources; the course of the conduits, aqueducts, and underground channels; former and newly added sections, and the public and private buildings that received water from the system. Istanbul’s waterway maps have been published and utilized, most thoroughly by the late Kazım Çeçen, in inquiries and surveys of the water supply of Istanbul. With the exception of a few works, on the other hand, their visual aspects, texts connected to them, the changes in their representational conventions between the sixteenth and the nineteenth centuries have rarely been made topics of scrutiny.

A number of questions regarding the representation of Istanbul within the context of its natural environments, and the urban practices that have shaped these representations will be addressed in this talk: What do the maps convey regarding the conceptualization and visualization of the city in connection to its hinterland, the city’s built fabric and its natural habitats, whether intra- or extra-muros? What do the emphases and the silences of these maps convey regarding water rights, changes in water use practices, and more generally, about the dynamics of private vs. public, court vs. city regarding access to and use of natural resources in the early modern city? In what ways did modes of imagining and representing the city’s natural environment change in the early modern era; are there connections between the premises of these maps and contemporary understandings of urban nature?

Çiğdem Kafescioğlu is an associate professor in the Department of History at Boğaziçi University. She received her bachelor’s and master’s degrees from the same department, and her PhD from the Department of History of Art and Architecture at Harvard University. She works on aspects of the visual, architectural, and urban culture of the early modern Ottoman Empire. Her ongoing research is on images of the city and the urbanity in the Ottoman visual, historical, geographical and literary sources, in connection with the spatial, social, and political practices and imaginaries. Her books include Constantinopolis/Istanbul: Cultural Encounter, Imperial Vision, and the Construction of the Ottoman Capital (Penn State University Press, 2009, a Turkish translation will be published by Koç University Press), and two forthcoming edited volumes in 2020: A Companion to Early Modern Istanbul (with Shirine Hamadeh) and Şehrin Doğası: Tarihsel ve Güncel Tartışmalar Işığında İstanbul’da Toprak, Yeşil ve Su (with Ayfer Bartu Candan, Cemal Kafadar, and Suna Kafadar). Her latest article, “Sokağın, Meydanın, Şehirlilerin Resmi: On Altıncı Yüzyıl Sonu İstanbul’unda Mekân Pratikleri ve Görselliğin Dönüşümü” has just been published in the first issue of Istanbul Research Institute’s YILLIK: Annual of Istanbul Studies.

The event, which will take place at the Pera Museum Auditorium, is free of charge. Please note that seats are limited and cannot be booked in advance. The language of the event is Turkish.