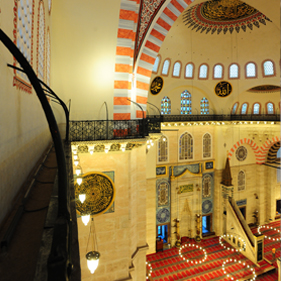 Confirmed Findings at the Restoration of Süleymaniye Mosque
Nilgün Olgun

The restoration work of the mosque, which was opened to religious service in 2010, had begun in 2007, and was completed in 2014 including the exterior cloister.

Many details mentioned in written sources in uncertain and sometimes contradictory ways have been clarified, and an attempt has been made at renaming the professions and types of material mentioned in Ömer Lütfi Barkan’s Süleymaniye camii ve İmareti İnşaatı (Construction of Süleymaniye Mosque and Imaret, Ankara, 1972) using the terminology of the present. There were some findings regarding the hand-carving schedule, which presented characteristic aspects of the period, and ornamentations in various locations, made with a variety of material, have been documented. Preservation rather than renovation has been the aim, and care was taken for each decision taken to comply with rules and principles. As a result, it has been possible to find solutions for disputed topics using the results of the research that served the aim of preservation.