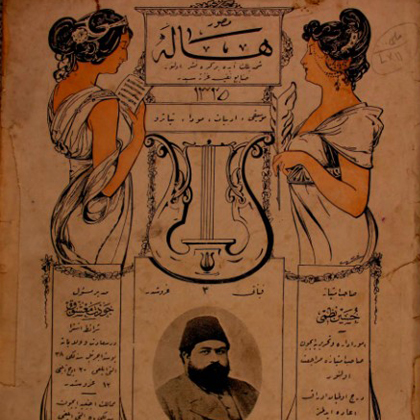 This presentation aims to identify the fine arts journals published over the two decades between the Second Constitutional Reform and the Alphabet Revolution; investigate their design characteristics and visual elements (decorative aspects and illustrations); and to evaluate their contents and visual materials from the perspective of the political, social, and economic situation as well as the cultural values of the period.

Witnessing ideological groupings, occupations, national independence struggle, and the laying of the foundation of a new Turkish state, the period between 1908 and 1928 is short in terms of duration but long-lasting in terms of its impact on the Ottoman Empire and the Turkish Republic. Before focusing on the art journals that began to come out in a period when political power and social transformations influenced the press, and the press in its turn impacted society, we will discuss the emergence of a different concept of “fine arts.”

Having briefly touched upon the general traits, goals, and subject-matters of the publications that dealt with, examined, and manifested fields of art that fell within the scope of the new “fine arts,” we will largely concentrate on journal designs and the identification, classification, and evaluation of the visual materials used in those journals.

The first group that visual materials are included in is the decorative works. Two important questions will be answered in the section that will discuss the areas of application and the formal traits of decorative elements, which are defined in art dictionaries as “every kind of element whose ornamental aspect dominates its concrete function,” “ornamental element,” or “decorative picture, ornamental picture.” The first question is whether or not ornamental (tezhip) and decorative elements, which are considered to be similar in terms of their logic of application, functionality, and formal aspects, are two different facets of a single tradition of design and ornamentation that has continued to be practiced for a long time. The second question is whether or not it is possible to treat decorative elements as an extension of the ornamentation practice (tezhip). The other group of visual materials is the “illustrations.” The samples in this group will be discussed from the perspective of their uses and with regard to their formal aspects.