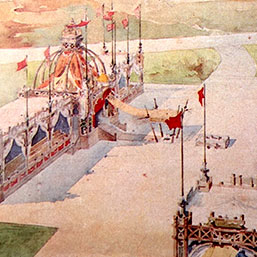 We have limited information on the “Dersaadet Agriculture and Industry Public Exhibition” that was intended to be the second in the Ottoman exhibition history, yet was cancelled due to the great Istanbul earthquake in 1894. The exhibition project, whose preparations began in early 1893, beyond introducing an architect such as Raimondo D’Aronco to Ottoman architecture, with its approach modeled on international exhibitions in the West, its planned architectural set-up, and its endeavor to enliven the economic and social life of the Abdülhamid II period, was a significant attempt in cultural history. Even though only a few drawings have survived from the exhibition project, some related documents found in the Ottoman Archives of the Prime Ministry complement the visual materials that have reached today. This study aims to improve what has been known about this exhibition by doing a background reading about the design process through the preliminary estimation reports and proposals written by D’Aronco, correspondences between institutions, and the national and international press, as well as to introduce the contributions of Annibale Rigotti who came to Istanbul as the assistant architecture of the project.