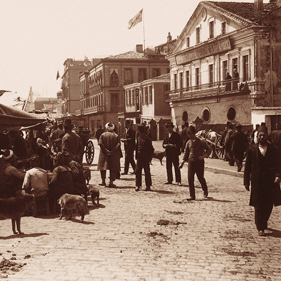 Imagining the City: Representations of İstanbul from Art to Life

İstanbul is a city shaped by layers of histories, identities, and cultures. The multi-layered character of the city in the archaeological sense permeates an entire culture and literature as well. As literature is written, the city transforms into an object worthy of the meaning of the word palimpsest. An object of desire at the same time, the different faces of İstanbul and the plethora of its images are envisaged on the textual level in different fields extending from literature to cinema. In that sense, İstanbul is a city that carries intertextual references. It is a dynamic machine shaped by the interaction of individual and social imaginings. Entitled, “Imagining the City,” this symposium aims to question the tales of İstanbul, the intersection of textual imaginings and the spaces in which we actually live, and the relationship between the imagined and the lived, the envisaged and the textual representation. After all, the relationship we establish with spaces and cities are also defined by the meaning of the love we attribute to them independently of their physical existence. In a Yeşilçam movie from the 1960s, for example, as a villager pronounces a mouthful of “İstanbul” in his dream to move from his village to the city, he speaks of an imaginarycity “paved with gold” rather than a tangiblecity. This symposium, thus seeks to chase the “imaginary city” of İstanbul with glimpses from literature, cinema, art history, sociology, and architecture.

Event is free of admissions, drop in.