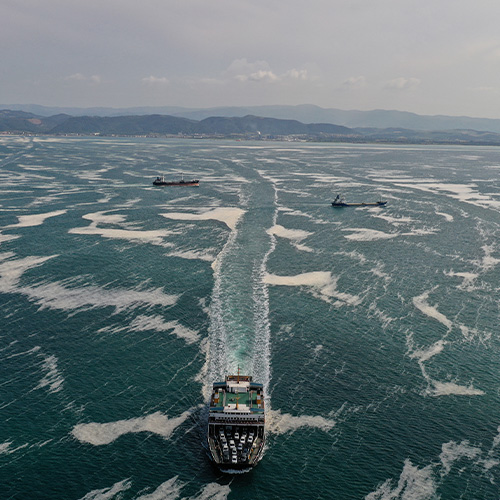 Istanbul Unbound Talks
The Sea and the Snot, Transcending Disciplinary and Administrative Boundaries

The Istanbul Unbound: Environmental Approaches to the City conference, organized by the Istanbul Research Institute and Pera Museum in April 2021, underlined the limitations of studying Istanbul only within its administrative borders and through anthropocentric perspectives, and the importance of transdisciplinary environmental approaches. The current mucilage/sea snot disaster reminds us once again how essential these approaches are. Formed in the Marmara Sea and moving into the Aegean Sea, unbound, the sea snot endangers the sea life and public health, it also shows a way to think about Istanbul and its environment: A multiplicity of intertwined issues, from anthropogenic pollution to marine biodiversity, food safety, public health, environmental justice, urban infrastructures, processes of scientific data production and sharing, needs to be discussed concurrently and through transdisciplinary perspectives. Based on the collaborations we developed for the Istanbul Unbound conference and co-organized by the Istanbul Research Institute and IstanbuLab, this event engages with the current ecological disaster through different scales and perspectives, and opens up the discussion for the ways in which the marine ecosystem could be repaired and protected.

Graduated from the Environmental Engineering Department of the Middle East Technical University. She received her second master’s degree in 1991 and her PhD in 1996 from Duke University. Since 1997, she has worked in the Environmental Sciences Institute of Boğaziçi University, and has been a professor since 2008. Her current interests include sustainable waste management, sewage sludge treatment and management, biogas and biofuel energy from biomass, waste to energy, and biological wastewater treatment. She published extensively in journals, and presented at various congresses, seminars, panels, and academic meetings. She was appointed as the Head of Environmental Protection and Control Department of the Istanbul Metropolitan Municipality in 2019.

He is an assistant professor at the Institute of Environmental Sciences at Bogazici University. He holds a B.Sc. in Biology from the Middle East Technical University, an M.Sc. is from the Civil and Environmental Engineering Department of Villanova University, and received his Ph.D. from the Chemical and Environmental Engineering Department of University of California, Riverside. Berat completed his postdoc at Yale University. Current projects include systems level investigation of algae for nutritional supplements, biofuels, value-added chemicals, and wastewater treatment applications. He also runs a program on the fate and transport of important pathogens in aquatic environments. His projects are supported by TÜNİTAK, NSF, Istanbul Development Agency and the British Academy. He has recently been awarded the Young Scientist Award by the Science Academy, FABED Eser Tümen Research Prize, and the British Royal Society Newton Fellowship. He is the Director of Istanbul  Microalgae Biotechnologies Research and Development Center and the Vice Director of Boğaziçi University Center for Life Sciences and Technologies.

Food engineer, academic. He received his PhD on environmentally friendly methods of analysis. He worked in various labs under the Ministry of Agriculture and Forestry. He began working at the Akdeniz University as an Academic in 2019, where he worked for the establishment of the Food Safety and Agricultural Research Center. He conducted research on detecting the residue of preservatives and other toxic chemicals in foodstuffs and water. He was dismissed from civil service with the Executive Order no. 677 on November 22, 2016, when he was working at the Department of Gastronomy and Culinary Arts. He has been awarded the Protection of Environment and Climate Prize by the Turkish Thoracic Society, Nusret Fişek Public Health Service Prize, Vefik Kitapçıgil Public Service Award, and Halkevleri “In Pursuit of the Truth” Award. His published books are Mutfaktaki Kimyacı and Bizi Yeryüzüne Bağlayan Hikâyeler.

She holds a Bachelor of Architecture degree from Mimar Sinan Fine Arts University. She graduated from Istanbul Bilgi University with an M. Arch. degree in 2008. Between 2012 and 2016, she completed her doctoral degree at Harvard University Graduate School of Design. Between 2016 and 2021, she worked at Özyeğin University and Hanze University as an assistant professor and a post-doctoral researcher respectively. Currently, she is a post-doctoral researcher at the TU Delft Faculty of Architecture and Built Environment. Her research interests include sustainable urban development, spatial transformation, and regional urbanization.

He works on marine biology at Çukurova University Faculty of Fisheries. He specializes in marine plastic pollution and has published extensively on the entry of micro plastics to marine environments, their spread, impact on the living, and transfer to the food chain. He is currently working on the sources of plastic pollution and its distribution in various ecosystems, as well as the plastic waste trade’s impact on the ecosystem. He is an integral member of the International Break Free from Plastic Initiative.

Duygu Kaşdoğan is an assistant professor of urbanization and environmental problems in the Department of Political Science and Public Administration at İzmir Kâtip Çelebi University. She received her doctoral degree in the Science and Technology Studies Program at York University, Canada. She is the founding member of IstanbuLab and Transnational STS Network and has been a council member in the Society for Social Studies of Science (4S) since September 2019. Her research focuses on democratization of science, transnational collaboration, political ecology of disasters, toxicity governance, and bioeconomies.