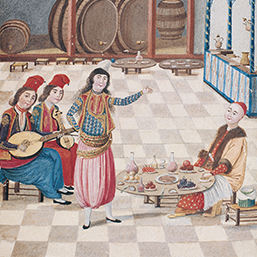 Public Houses of Istanbul at the end of the 18th Century

The public houses (meyhane) of Istanbul have been in existence for centuries, playing an undisputedly important role in the social and economic history of the city. Despite this fact, these venues were seen as having links to criminality and marginal activities, leading to a tension with the state, which often attempted to “wipe them out” of urban settings. The image the state had of public houses and their position in social life underwent a change during the Reform era, marking the beginning of their evolution into their present form. Işıl Çokuğraş, research assistant at Yıldız Technical University’s Department of Architecture, will discuss the place of public houses of Istanbul during the early modern period at the end of the 18th century, right before this transformation began.

This was a period of change in social roles as well as an expansion of the public sphere, both of which were met with apprehension and an inclination to curtail, as reflected in the attitude of the state towards public houses. These venues were quite common throughout the city, and determining their locations and the way their numbers changed in specific districts will shed light on how the state transformed the urban fabric of Istanbul. Studying the regulations imposed during this period on public houses, which constitute an important element of Istanbul’s history, will hopefully also offer an opportunity to question current methods of intervention regarding the public sphere and urban spaces.