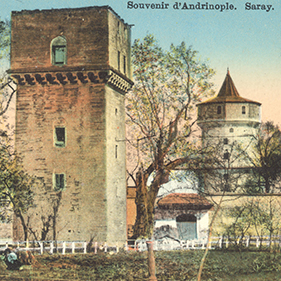 Two important palaces built during the Ottoman Era are located in Edirne. They are known as Eski Saray (Saray-ı Atik; Old Palace) and Yeni Saray (Saray-ı Cedîd-i Âmire; New Palace). In addition to these two palaces, notables of the state also had mansions and pavilions (Buçuktepe Palace, Mamak Palace, Akpınar Village Palacve) built in various part of the city, particularly along the rivers of Tunca (Tundhza) and Meriç (Maritsa). Unfortunately, none of these has survived to date and their locations within the city have not yet been identified.

The first palace in Edirne was commissioned by Sultan Murad I and built in 1365-1368 in an area that falls between the ridges of Muradbey (Muradiye Küçükpazar) and Topraklı (Kırlangıç Yokuşu). It was named Yeni Saray (New Palace) at the time of its construction. When the existing palace near Selimiye Mosque fell short of meeting the needs of the court, Sultan Murad II commissioned a new palace along the bank of Tunca River. However, the construction of the palace was completed by his son Mehmed II. Once this palace was also named Yeni Saray (Saray-ı Cedîd-i Âmire) during the reign of Mehmed II, the former palace at the city center came to be called Eski Saray (Old Palace).

The construction of Edirne Palace (Saray-ı Cedîd-i Âmire) began in 1450 towards the end of Sultan Murad II’s reign in the west of Tunca River at a part of Edirne known as Sarayiçi and evolved into a large complex through renovations and new annexes in the subsequent periods. Many of its buildings were constructed during the reign of Mehmed II in particular. Comprised of nearly 70 buildings serving different functions, this palace was sprawled across an extensive area. It was damaged considerably as of the 19th century, particularly during the Balkan and the Russo-Ottoman wars and many of its buildings were destroyed. The following; however, have survived to date: Matbah-ı Amire (Imperial Kitchen; 15th century), Babüssade (15th century), Cihannüma Kasrı (Cihannüma Pavilion; 15th century), Kum Kasrı Hamamı (Kum Pavilion Baths; 15th century), Fatih Köprüsü (Fatih Bridge; 15th century), Adalet Kasrı (Palace of Justice; 16th century), Kanuni Köprüsü (Kanuni Bridge; 15th century), Su Maksemi (Water Distribution Unit; 15th century), Şehabeddin Paşa Köprüsü (Şehabeddin Pasha Bridge; 15th century), Namazgâhlı Çeşme (Namazgâhlı Fountain; 16th century) and Av Köşkü (Hunting Lodge; 17th century). While some of these extant buildings are dilapidated, others continue to survive through a series of renovations. Used as an arsenal upon the orders of the commander in charge during the Russian attack on Edirne in 1877-78 and burned down, the majority of the palace buildings has been destroyed and only a few have remained intact.

Considered among the most important cultural heritage sites of Turkey and carrying particular importance with respect of Ottoman archaeology and palace life, Edirne Palace has been the site of archaeological excavations, conservation, and restoration since 2009 through the support and collaboration of The Grand National Assembly of Turkey (TBMM), Ministry of Culture and Tourism, and Bahçeşehir University.