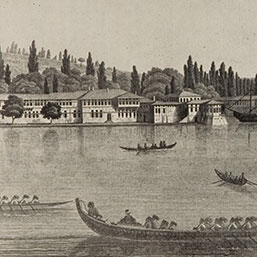 As a result of the significant changes that occurred in Ottoman administration during the periods of Selim III (1789-1807) and Mahmud II (1808-1839), the settlement pattern on the shores of the Golden Horn changed as well. These shores, which had been the first resort area of İstanbul before the Bosphorus became popular from the 17th century onwards, could retain this quality until the end of 18th century, and the process which began with the demolition of the main building of the Aynalıkavak Palace by Selim III and the addition of its land to the shipyard alongside the building of industrial facilities in place of the coastal palaces that were used by the royal family during the reign of Mahmud II, ended with the complete transformation of the shores of the Golden Horn into industrial areas in the early Republican period.

By tracing the Bostancıbaşı registers that were written in the Selim III and Mahmud II’s reigns, this lecture will survey the settlement and transformation on the shores that extend from Ayvansaray to Kasımpaşa.