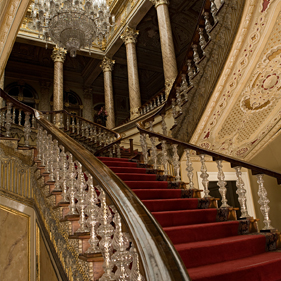 Following the important political developments during the reign of Sultan Mahmud II, and specifically the abolition of the Janissary Corps in 1826, changes occurred in many areas including the organization and furbishing of the palace, and the traditional palace architecture and art were taken to a new level.

The architecture of the palace, mansions, and summer mansions built in the 19th century, their sections, and the tens of thousands of objects in those sections require an examination and study that will result in shedding light on the history of these sections as well as a detailed understanding of their construction process. Among the royal buildings constructed in this period, Dolmabahçe Palace deserves a unique place with its architecture and the fact that it has survived with its furbishing intact.

Sultan Abdülmecid added a new dimension to the reformation movement instigated in his father’s time with the Imperial Edict of Gülhane, and changes in palace organization and furbishing were continued. Built to reflect the architectural style of the period and hosting a rich cultural heritage in the area, Dolmabahçe Palace was the expression of the Tanzimat period in terms of architecture, art, organization, and furbishing.

Almost 160 years after it was constructed, Dolmabahçe Palace will be taken up in this presentation with a new approach, thanks to the new archival material made available for research. The focus will be on answering questions regarding the construction process, the builders, and the layout of the palace, which will be followed by the presentation of new findings, accompanied by visual material, concerning the palace organization of the 19th century.