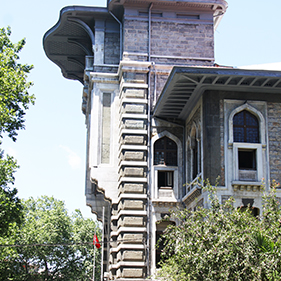 Ottoman Levantine architect Alexandre Vallaury is recognized for both the quality and quantity of the many projects he brought to life between 1880 and 1909. In addition to that, he has trained tens of architects at the School of Architecture in the Academy of Fine Arts, the first institution of learning in the Western sense in Turkey, where he served as the director of the architectural project workshop for twenty-five years. In that respect, he is one of the leading actors in creating the architecture of Turkey in the first quarter of the 20th century.

His extended education at École des Beaux Arts and experience in Paris were among the main factors that have shaped the architectural identity of Vallaury. Following his return to İstanbul, Vallaury became part of the team Osman Hamdi Bey put together to train architects and artists that would formulate the new Turkish and Ottoman art as part of a revised state policy. This was a second determining factor that helped shape Vallaury’s professional stance. The combination of a strong background and a network of relations carried Vallaury to key positions and provided him with a prolific career.

In the early 1880s, the agenda of Ottoman architecture was shaped by the search for new and original styles that could help reposition Otto-Turkish architecture in history, the urgent need for expert manpower for the infrastructure and development works that required innovative technology in big cities, and design solutions that could reconcile the needs and demands of an increasingly diversified group of capital and power holders of various origins and political views. Having retuned to İstanbul with the architecture education and eclectic design notion he received from the Beaux Arts and the know-how he obtained in Paris, Alexandre Vallaury thus emerged as the man with the capacity to produce solutions for such needs and expectations.