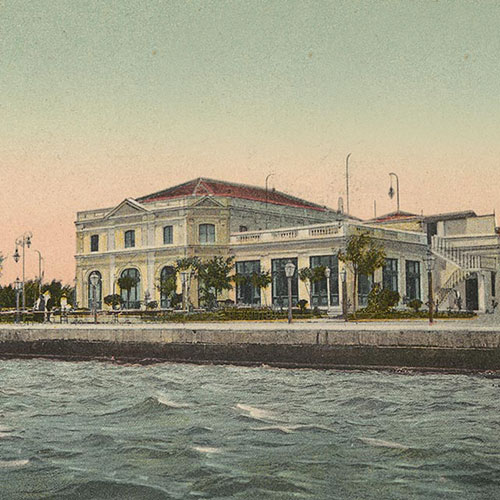 This year marks the 80th anniversary of Atatürk’s death. As a commemoration, İstanbul Research Institute presents “Talks on Atatürk.” The first talk is “Thessaloniki during Atatürk’s Childhood and Youth” by Prof. Vasilis Colonas.

During the years 1890-1910 Thessaloniki was much influenced by the Ottoman Empire’s increasing adoption of western ideas and practices. The ruling classes had already realized that only the West could provide avenues for the realization of their ambitions, models to suit their needs, and a material fulfillment of their dreams. Thessaloniki’s multiethnic and cosmopolitan society, and its long-standing contacts with the West, lent it a certain resemblance with the Ottoman capital. “Exquisite new buildings rising on the foundations of the old; plots of land left undeveloped for years now filling with houses, shops, cafés, gardens; the old city spreading out two kilometers beyond the walls, the surrounding countryside full of fine new buildings (…) everywhere new roads being laid, the old streets being gradually widened, the planning laws being strictly enforced; down at the waterfront the quayside is being widened too and soon, when the new work at the port is completed, the city will make the most attractive of impressions on the visitor arriving by sea, with its long parade of fine buildings stretching all along the promenade” (Nea Alitheia, 4.4.1906). For some it would always be a city of the Levant, for others it would be a modern European port, but in the eyes of all it would remain a cosmopolitan world, enigmatic and elusive, a city passing from the 19th to the 20th century, growing in population, pushing out far beyond its original nucleus, modernizing and changing in image.

About Prof. Vasilis Colonas
Born in Thessaloniki, was graduated from the School of Architecture of the Aristotle University. Continued his studies in Paris, in the fields of Conservation and Restoration of Historic Buildings and Monuments, Art History and Museology (University of Paris I). Since 2003, Professor of Architectural History of 19th-20th centuries in the School of Architecture of the University of Thessaly in Volos. He has taken part in numerous scientific conferences in Greece and abroad and published studies in Greek and foreign books and periodicals. He has worked in the fields of exhibition organization and museology and was member of numerous European Research Programs related to the architectural heritage in the Eastern Mediterranean and Black Sea countries of the 19th-20th centuries. He has taught in Universities in the USA, Canada and France. Since 2012 member of the scientific committee of the European Association for Urban History. His books in English: A hundred years of Hospitality, the hotels of Thessaloniki 1914-2014, University Studio Press, Thessaloniki, Greek architects in the Ottoman Empire, Olkos, Athens 2005 Italian architecture in the Dodecanese islands (1912-1940), Olkos, Athens 2002.
This event will be held in Pera Museum Auditorium. Free admissions; drop in. The talk will be in English.