Annual of İstanbul Studies No.5

İstanbul Research Institute was founded to organize events aimed at increasing sensitivity regarding the “loss of memory” in the city, the identity crisis this triggered, and the cultural erosion. Annual of İstanbul Studies, has served this purpose since the beginning, making an effort to include a series of articles that aim to discuss the city’s past in a comprehensive manner.

The 5th issue of the Annual offers original research addressing various aspects of the city’s history, archaeology, and cultural identity covering the Antiquity as well as Byzantine, Ottoman, and Republican periods: inscriptions from the Antiquity; Byzantine women founders and monasteries; frescoes at the Kalenderhane Mosque from the short-lived Latin rule following the Fourth Crusade; Byzantine conduits in the hinterland of the city where water has been a problem for ages; the architecture and social impact of the Sa’dâbâd Palace and its environs, which used to be the symbol of the Tulip Period and then disappeared with almost no trace; the Galata Mevlevi Lodge and its environs, which played an important role in the mystical and cultural life of the city, and the transformation it underwent during the second half of the 19th century; the development of observatories from the 19th century to the Republic; analyses of the documents pertaining to the construction and decoration process of the Hareket Köşkleri at the Dolmabahçe Palace, and the transformation of summer houses from The Reform Era to the Republic. 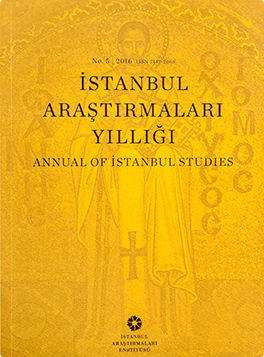