The exhibition and catalogue entitled, ‘Ottoman Architect D'Aronco’ was a compilation that brought together, after a hundred years, the projects, drawings, and sketches produced by Italian architect Raimondo D'Aronco' (Gemona 1857 – Sanremo 1932), who lived in the cosmopolitan capital of the Ottoman Empire between 1893 and 1909 and left his imprint on many important buildings during his stay in İstanbul. As evident from the magnificent architectural monuments he created, D'Aronco joined Europe’s international Art Nouveau movement from the privileged site of observation, which served as the point of convergence for many cultures throughout the centuries and contributed to this movement with his views of Islamic-Ottoman art. D'Aronco's contribution is particularly important, as it is part of a theme constituting the characteristic features of an architectural quest centered in Vienna. With its genius loci character, this theme is the rediscovery of folk art and aims to revive, as part of the interaction of languages and cultures, narratives defining national identity. In this highly rich context, D'Aronco's work functions as a bridge between Islamic art and the ongoing debates in Europe; as the architect acts as a bridge, he simultaneously pursues an interest in the interaction of the East and West, which has any many supporters in Hungary as in Vienna. D'Aronco's propositions are not limited to decorative features alone; they encompass an entire space as an organic whole. By extension, the numerous yalis he built along the Bosphorus primarily for a select group of customers affiliated with the Palace, as well as the buildings he constructed in the city (fountain, tomb, and library on Yıldız Slope, the library and collection hall of Memduh Paşa yali in Arnavutköy, Cemil Bey House in Kireçburnu, masjid in Galata, and the Italian Embassy building in Tarabya) allow us to understand some of the main themes of his passionate objective of renewing Turkish architectural culture. By opening the way to integrate it with European art in terms of modernization, D'Aronco proves that the spirit of “Turkicism” can be captured. This means the adaptation new construction techniques and materials without neglecting tradition, which is embraced entirely without any nostalgic concerns. 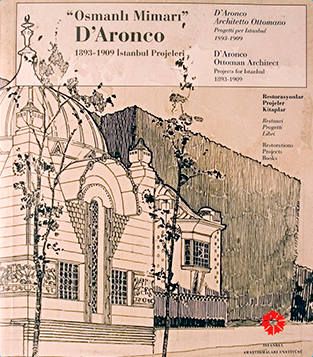