Published as part of the İstanbul Studies Series of İstanbul Research Institute, Bachelor Rooms and Taverns focuses on the concept of marginality and space in Ottoman Istanbul from 1789 to 1839.

Bachelors represented a group that constituted a significant majority of the workforce the city needs and were simultaneously categorized as individuals lacking family supervision and thus were perceived as a threat to the neighborhood-oriented style of living.

The tavern was a similar kind of space, for alcohol consumption was, for long years, a practice regarded common to non-Muslims, or, at least, officially articulated as such. Yet, a portion of the Muslim population consumed alcohol in almost every period of the Empire.

This book strives to shed light upon the two semi-secret, yet perfectly ordinary marginal concepts of the late-Ottoman Istanbul. In doing so, the book traces the historic steps of a series of indispensible realities that have long been belittled and characterized as problematical.

Işıl Çokuğraş: (İstanbul, November 26, 1982) Çokuğraş graduated from Robert College in 2000 and from İstanbul Technical University’s Department of Architecture in 2005. She received her Master’s from the Architecture Design Program in 2008. Having completed her PhD in 2013, Işıl Çokuğraş is currently serving as an Assistant Professor at İstanbul Bilgi University. 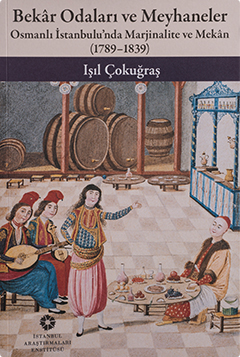